A Dictionary of American Idiots 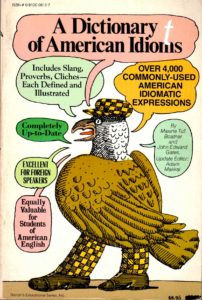 “Senator, you’re no Jack Kennedy!”. This is what Loyd Bensten(D) replied to his opponent Dan Quayle(R) during the vice-presidential debate of the 1988 campaign. And that was a 15 seconds standing ovation, making fun of someone who even believed that the people of Latin America spoke Latin (instead of Mexican, right?).

And the bottom line is… that there isn’t one, especially reading Joe Biden’s ‘How to Stand up to the Kremlin‘ on Foreign Affairs, where he stated that “A similar Russian effort is now under way to support Northern League and the populist Five Star Movement in Italy’s upcoming parliamentary elections”.

“Populist”? But You know what? Sometimes, as recently whispered to the ‘NYT’ ( http://www.civitasdemocratica.it/2017/05/18/from-pilate-to-pilates/ ), it happens that there are “people who need people”.

On the other hand, there are people who purposely seem to forget other people: anybody remembers U.S. “meddling” during the 2016 Italian Constitutional referendum with Ambassador Phillips’ leak? ( http://www.civitasdemocratica.it/documents/usa/phillips_190916.pdf )

Talking about Russia, right before the 1917 revolution “the real concentration of power is in a fraction of 1 percent”. Why “is”, and not “was”? Because the above quotation was taken out from the 2017 Noam Chomsky’s ‘Requiem for American Dream’.

Chomsky who? Friend of Stravinsky and Kerenskij? Yes, him.

A hundread years later, aren’t we facing in the USA a pre revolutionary Czar situation?

GOP‘s fault? No, because as mentioned in 2013 to former President Obama ( http://www.civitasdemocratica.it/documents/usa/obama_220213.pdf ), the kickoff to financial speculation was performed during the Clinton Administration, wiping out the 1933 Glass-Steagall Act, so that business started being on the rocks, leading most of the people on the ropes. On the Q.T., because at that time (1999) no one mentioned anything about it: “money’s too tight to mention”?. Besides Reaganomics, can we talk once in a while about Clintonomics?

Going back to Biden’s article, it’s hard to believe it was possible to sneak below Quayle’s IQ level: how the Democracts, biding their time, are expecting to go back in the Oval Office with these ‘too big to fake’ analysis?